I was feeling pretty good after a series of easier days (the 300 metre sprint two days ago was too short to tire me out) so I decided to do a long run today. I completed 32 km in a touch over three hours, feeling very comfortable throughout and finishing strongly. It was very pleasing.

These days I have no trouble physically with jumping up to 30 km or more. The difficult part is the psychological aspect. When it’s in the countryside, particularly on roads I’ve never run before – as the world run was so often like – it’s a breeze psychologically, but when I have to run the same old streets around my neighbouring suburbs, as I’ve been doing for more than thirty years, it’s much harder to motivate myself.

But I did manage to motivate myself today, though I may start looking further afield for future long runs ahead of the 12 hour race in Fort Lauderdale in Florida in November. By the way, this morning I received confirmation of my airline tickets to that race, so it definitely looks like it’s on.

Today’s world run photo is a strange one. I saw this sign just before Hamilton in NZ. The funny part for me is that it was written by someone called Roger Blunt. That’s a name I sometimes call my good mate, Roger Sharp (who is also CEO of my sponsor, Asia Pacific Digital). It was too good an opportunity for me to pass up. 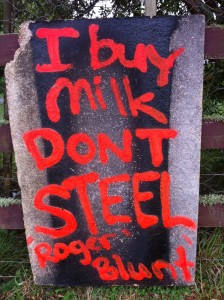 I also startled a deer, rabbit, and squirrel when I ran past them. All three were drinking together in a stream. It was a like a scene from Bambi.

I must admit, I’m sick of hearing barking dogs. Everyone around this region seems to keep dogs, either on a short leash or in cages. I assume they are used as guard dogs. Because of their lack of freedom, they’re all quite mad, and go nuts when I run by.