There was certainly a positive reaction to the mentioning of a possible second world run. Anyhow, that’s a long way off yet. More immediately I have the ultra in Florida, which is looking close to certain now.

For those interested, it’s the Icarus Ultrafest, which includes a 6 day, 48 hour, 24 hour, and 12 hour race. I’ll be doing the 12 hour version, as my recent training is more attuned to the shorter event. The six day option is the same race that Jesper Olsen won last year. He’ll be a big chance again this year.

In fact, all four current members of the World Runners Club (those whose world runs have been officially ratified by the World Runners Association) have been invited to the Ultrafest for the purpose of making a documentary. Kevin Carr, like Jesper, will also be running the 6 day event. Tony Mangan will be helping out with support crew duties. It will be the first time we’ve all met together in person. The festival itself takes place during the second week of November.

The photo for today is from just north of Wellington, the capital of NZ. The shot is looking north at Kapiti Island in the South Taranaki Bight, on the west coast of the North Island. 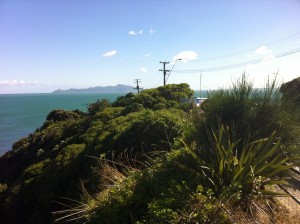 Yes, it is duck season, and today I passed a whole field of guys in their fatigues, firing sporadically at ducks. The field was only about a big as four football pitches, and it was a touch scary having these guns going off within a hundred metres of me. I still fail to understand why anyone would want to kill animals for pleasure!

Very soon after that, Kate, Tony, and Sue Day met us on the road. They had driven from Sydney so that Kate could run with me. She ran the last 17 km or so, on a course I ran in 2009 as part of my Melbourne to Sydney run. I was feeling much stronger today than I did on that occasion.