Six days ago I strained my right quad when I tried to accelerate rapidly up a hill. It was nothing really, and I couldn’t feel it a couple of days later. I assumed it was completely better this morning and attempted another 300 metre sprint. Unfortunately, I immediately strained the muscle again as I took off and I had to abandon the sprint. I’ll need to have at least a few weeks break from sprinting now.

It’s not a major injury by any means. I can run quite easily and had no trouble jogging home. I just can’t accelerate. So I will simply concentrate on training for the 12 hour race for a while.

The experience is not without its positives. My whole strategy recently has been to ease myself into sprinting over a period of several months. It’s better than ramping up the sprint training too soon. That’s when major injuries occur. I accept that I’ll have a few minor strains here and there as I gradually add sprinting to my training. It’s a learning experience and one that’s best absorbed over time.

The reality is that, after many years of training up for and then running around the world, my muscles, tendons, and ligaments got used to nothing faster than a slow jog. It’s taken me well over a year to adjust to the sort of pace I ran in the City to Surf, and it’s going to take quite a bit longer to now adjust to flat out sprinting. Maybe I won’t ever get there. Time will tell.

The world run photo for today is of a nice bunch of flowers I ran by in NZ. They looked like an unusual form of rose. And I did stop to smell them, as the saying goes. 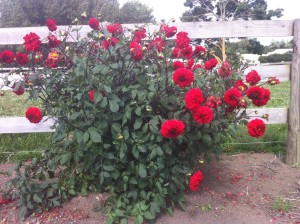 For the past 25 years, I have been organising an annual cycling tour in south-eastern Australia. Each year we ride a different route. We usually have about thirty or so riders, with a range of backgrounds, but we all get on fantastically. You may have heard me previously mention such classic characters as Big Bad Bobby Quin, Klitty, Jimbo, Big Huddo, Dave, Mother (who is a 60 year old bearded man), the VC, Big Andy, Pepe, and the irascible Mr Reefton Humblewood. There are many others who deserve a mention. Sorry to those I’ve missed.

In the very near future, a new organization will be launched – the World Runners Club. The founding members will be Jesper Olsen and myself, with Tony Mangan being a provisional member until he completes his epic journey late next year. I would expect Kevin Carr will also be a member when he finishes his journey in early 2015.

Once it is officially launched, I will provide the web site and other details for the organization. The requirements for joining the World Runners Club are basically the same as the guidelines for setting a record for running around the world. Any prospective “world runner” is welcome to make contact to ensure compliance with the requirements.

One of the rules for “Fastest Circumnavigation of the Earth on Foot” is that 26,000 km must be covered. However, I would like to see all world runners cover at least 26,232 km, in honour of Jesper Olsen – that’s the distance he actually ran to set the inaugural record, and it’s the distance I, therefore, completed last week, out of respect for Jesper.

On other matters, I had the privilege of attending a Rabbitohs training session yesterday, and I was invited to address the team when training had finished. The players were very interested in my run, with lots of questions being asked. Thanks to Sarah Brady and coach, Michael Maguire, for such a unique opportunity. I hope to soon post some photos of the occasion.

Finally, I’d also like to again thank St Charles School at Waverley for their on-going fund raising for Oxfam. Money continues to flow in from their walkathon, and the school’s total now stands at around $9,000. That’s a huge effort for a school, and is worthy of a very special mention. It has helped my overall total reach almost $60,000.