Besides talking to the gathering about my run around the world, I also got to present various members with their milestone singlets – 10, 15, 20, 25, and 30 year singlets. But the best part was presenting singlets to two honorary members – a couple of teenage boys with cerebral palsy. It was a great honour for me.

Today’s photo is one where I was running through a small Czech town west of Prague. As you can see, I was still rugged up against the cold at this stage, which was early in April of 2013. 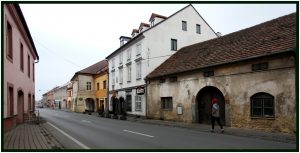 For the past 25 years, I have been organising an annual cycling tour in south-eastern Australia. Each year we ride a different route. We usually have about thirty or so riders, with a range of backgrounds, but we all get on fantastically. You may have heard me previously mention such classsic characters as Big Bad Bobby Quin, Klitty, Jimbo, Big Huddo, Dave, Mother (who is a 60 year old bearded man), the VC, Big Andy, Pepe, and the irrascible Mr Reefton Humblewood. There are many others who deserve a mention. Sorry to those I’ve missed.