This morning I did a fast lap of Centennial Park. Well, it wasn’t that fast – just 16:10 (which is more than 4 mins per km) – but that’s not too bad, as I was very comfortable throughout. Once again, my lungs were fine. It was my leg muscles that were the limiting factor. I’ll do this sort of thing every couple of weeks now to keep my speed at a respectable level.

Next week I’ll be acting as support crew to Tony Mangan for a few days as he finishes the Australian leg of his world walk at Bondi Beach. I’ll meet Tony somewhere down the coast south of Sydney, and then accompany him north to the city. I did a similar thing with Kevin Carr when he was approaching Sydney in 2014, and I caught up with Serge Girard when he started his Australian leg in Sydney last year. As you can see, world runners tend to help each other out. It’s more about camaraderie than competition.

This photo is from my friend John Huckerby’s (former) place in Wellington, NZ. This was taken as I began the NZ North Island leg in late January 2012. We stayed with John and Liz for a couple of nights as I made my way north towards Auckland. 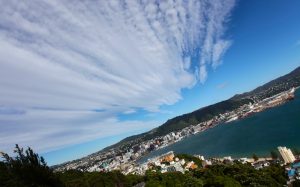