But I’ve finally now regained that ability. For example, this morning I did a 13 km around Huskisson on the south coast (I’m here for a couple of days) and that same 5 min/km pace once again felt easy. In fact, I was able to breeze along at that speed with barely an effort. It’s good to be back, and is a positive sign for the 12 hour ultra in November, not that I’ll be running at 5 min/km during that race. It may feel easy for one hour, but I’m sure I couldn’t maintain it for 12 hours.

I know I’ve posted a previous photo of the Golden Gate Bridge in San Francisco, but this is one I took from a different vantage point. This was taken within the first hour on the first day of my North American leg. There was another 12,000 km to come before I concluded running in the US. 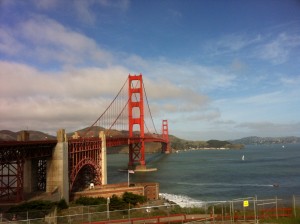