Another good long run this morning – 36 km in a tick over 3 hours 20 minutes, including the final kilometre in five minutes. I ran around the general neighbourhood again, but it wasn’t mentally too difficult because it was such a beautiful spring day. It’s hard to be bored when the weather is perfect.

I did feel a tightness in my left calf at around 10 km, but a little stretching and it gradually subsided. I also felt the right quad strain a little toward the end, but I think that was just due to general muscle fatigue.

Today’s photo was taken on the Big Sur stretch of coastline in February 2012. Every day in California was pretty much like this – cloudless blue skies and moderate temps. 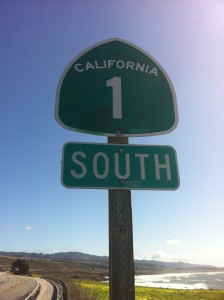