I did another time trial this morning, not because I have a fast event coming up, but to enhance my running fitness and maintain some semblance of speed. On this occasion it was 3 km, which I ran in 11:54 (4:04, 4:02, 3:48). I didn’t push too hard, ensuring I was reasonably comfortable throughout. It wasn’t fast, but I was pleased to go under 12 minutes.

It’s important to not overdo it when engaging in speed work over a long campaign (in this case it’s almost six months before my next race). Going too hard and experiencing serious pain is the quickest way to suffer psychologically. Better to take it easy (though not too easy) and gradually improve over the long term.

I will shortly be leaving to meet Tony Mangan on the road south of Sydney. He has four days of walking before reaching Bondi Beach on Sunday. It should be an interesting few days. I’ll do some walking with him, before running back to the car and catching up with him again, repeating this process throughout the day. I’ll post again from the road at some stage.

Here’s another photo from NZ during the world run, this time taken on the Desert Road, to the east of Mt Ruapehu (in the middle of the North Island). Believe it or not, NZ does have a desert of sorts – a small but unusual region that gets very little rain, due to being in the “shadow” of the 2,800 metre high volcano. 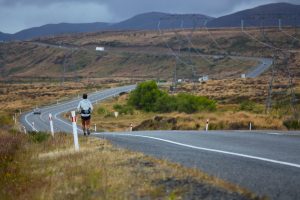