Back in Sydney now, which means back to my usual running haunts. I can’t complain too much. I have Centennial Park just down the road, along with the coastal trails and beaches. Anyhow, I will end up with over 100 km this week, most of which was run in Launceston. Still no major issues after the 12 hour run.

This ‘old favourite’ is a photo from October 2012 as I ran beside the Erie Canal in upstate New York. Yes, this is how wide the canal is, but it was actually even thinner when it was first opened in 1825. There are cycling/walking trails virtually along the whole length of the canal. I thoroughly enjoyed my time running there. 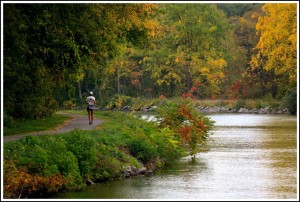 The last couple of days have been quite a bit warmer than any other day so far on the run in Australia. It has only been about 23 C in the shade, but in the low 30s in the direct sunshine.