Last week’s running totalled 110 km, meaning I’ve run more than 300 km in the three weeks since my 12 hour run. That’s more than I expected, but I’ve been careful and haven’t suffered any real repercussions. This morning I threw in a bit of speed work for the first time in a couple of months. It wasn’t much – it would have been foolish to have pushed it – but I felt good and it augurs well for the months ahead.

Serge Girard is now running in Hawaii after finishing the North American leg of his world run in Anchorage, Alaska. He’ll be heading to Fiji next, then New Zealand, before beginning his run across Australia in mid October. I hope to catch up with Serge at that time, although it will depend on the precise timing of his arrival – the Tour de Bois begins right around then too. And Tony Mangan is in Siberia, fast approaching Mongolia. You can follow both of them on www.sergegirard.fr and www.facebook.com/tony.mangan.14 respectively.

Here’s another old favourite of mine – a photo I took of Carmel preparing our lunch on the French-Swiss border in March 2013. You can appreciate that I didn’t suffer in regard to fine food on my world run (although some would argue against that claim when I was eating meat pies and Chiko Rolls for lunch on the Australian leg). 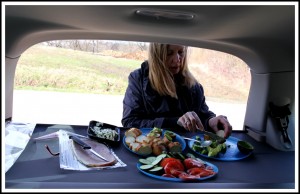