After an easy run of 5 km yesterday, this morning I put in an encouraging 29 km at good pace. I felt pretty good throughout, although a little tired by the end. I think some of that can be put down to the fact that it was relatively warm for this time of the year and I only stopped for one small drink at about the halfway mark. I wasn’t actually thirsty by the end, but I was probably starting to get a touch dehydrated.

I’ve always found I can get through long runs on minimal water, except on really hot days, of course. It always amuses me when I see people carrying drinks on really short runs or walks. I remember talking with a woman one time who was walking (I was running) – she was carrying two bottles of water. I asked her how far she was walking. It turned out to be about 2.5 km – and it was a cool day and she was walking in the shade. She insisted it was necessary to carry drinks whenever she walked. It’s not!! Why anyone would need to carry a drink to get through a gentle 2.5 km walk is beyond me.

It’s another photo today from the middle of the North Island of NZ. I remember I could see the majestic Mt Ruapehu volcano from a hill top near where this shot was taken. 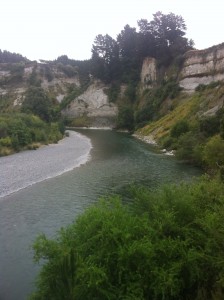 I had to duck into a polling booth in Marulan to vote in the Federal election, after which, I ran a short distance with Barry to conclude the day. I passed two milestones during the day – 26,000 km and 99% of the journey complete. Barry totalled 20 km today, and Richard 22 km.

It was a very warm day, apparently 29 C in Sydney, so it appears we are well out of winter now. Tomorrow I’ll be heading along the Southern Highlands, getting ever closer to the coast.