Feeling pretty good on the road, with another good run today. Now I have to decide on a new focus for the months ahead. This time last year I was concentrating on the Icarus 12 hour race in Florida. I won’t be in a position do that race this year, so I need to find something else to direct my attention toward.

Speaking of the Icarus Ultrafest race, below is a photo of me in that race (taken by my fellow world runner, Tony Mangan). It’s interesting to compare my body shape here with the photo further below from my world run. The difference is stark. I estimate I was about 10 kg lighter during the world run. Yet I was still able to win the 12 hour race in Florida, as bulky as I was. I sometimes wonder how I would have done in that 12 hour race had I been as light as I was in the bottom photo. 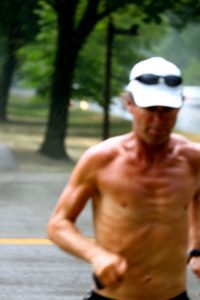 I had to duck into a polling booth in Marulan, to vote in the Federal election, after which, I ran a short distance with Barry to conclude the day. I passed two milestones during the day – 26,000 km and 99% of the journey complete. Barry totalled 20 km today, and Richard 22 km.

It was a very warm day, apparently 29 C in Sydney, so it appears we are well out of winter now. Tomorrow I’ll be heading along the Southern Highlands, getting ever closer to the coast.