A funny thing happened on the way home from London. After a stopover in Dubai, we took off for the final leg to Sydney. Almost immediately we found ourselves circling repeatedly just south of Dubai. Eventually the pilot let us know the news that there was a mechanical difficulty and we’d be making an emergency landing back in Dubai. On the ground we soon found that the problem was not immediately fixable, and that all passengers would be put up in hotels overnight.

While annoying, most of attempted to put a positive spin on the situation and make the best of it. For me, this was helped somewhat by the palatial suite I received. The bed is as big as anything I’ve seen (though I’m quite comfortable in small beds) and I have two bathrooms, one bigger than our bedroom at home. I enjoyed some time in the biggest bath I’ve ever seen as well. And there is an enormous lounge room too, plus an office area, replete with an oak desk.

This morning I went for a run in stifling heat. Besides the climate, Dubai is made for cars, so it’s not a great place to run. But at least it was different, and a place I can now add to those I’ve run in. At least the heat is very dry. I was barely sweating after 5 km in close to 40 C heat.

I cooled off with a swim in pool. Later in the day you can sit in the pool on a submerged stool at the bar, sipping cocktails. I didn’t avail myself of that one though. Drinks are extremely expensive in Dubai hotels. I had a couple of beers last night, only to find they cost about A$15 each.

So, the second attempt to fly home happens in a few hours. Fingers crossed.

This photo from the world run, taken in NZ, is quite appropriate for today’s post. If I was to do any appreciable running in Dubai, I’d be applying at least this much sunscreen. 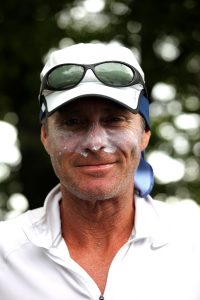