I’ve had a few responses regarding my comments on carrying water or other drinks while running. So I thought I’d elaborate a little to clear up any misconceptions.

I certainly did carry drinks while running around the world. However, it was generally only when it was warm and when I knew Carmel wouldn’t be seeing me for a few hours. I had enough to carry as it was – GPS device, phone, money, credit card, and ID, as well as spare sunscreen – so I preferred not to carry drinks if I could help it. But some days it would have been silly to head off without spare fluids.

But the main reason I didn’t bother carrying drinks was because I simply didn’t need them. I rarely ever felt thirsty, even on the couple of days when I ran more than 40 km without any support (no drinks or food). If you do regularly feel thirsty, even on short runs or walks, then feel free to take a drink with you.

But if you want to reduce your reliance on fluids during exercise, there’s a very easy way to do so. Eat less salt. As I’ve mentioned many times, including in my book, I never touch a salt shaker. I get more than enough sodium in the assorted processed foods I eat. This was a key component for survival in the heat of the US summer of 2012, which I managed to get through without too much discomfort. And I never had the slightest hint of a cramp (actually, I haven’t had a cramp in more than 30 years, since I reduced salt intake, but I used to get them all the time when I was a regular salt user as a kid).

Sometimes on the world run I couldn’t avoid high sodium food, particularly when we had takeaway or delivered meals at night. I always felt the heat and was more thirsty the next day. If I wanted to feel good and able to run a long way without feeling the need for a drink, the solution was easy – eat food with minimal sodium.

The world run photo for the day is of a very tranquil scene on the North Island of NZ, near the town of Taihape. Who wouldn’t want to run in a place like this? 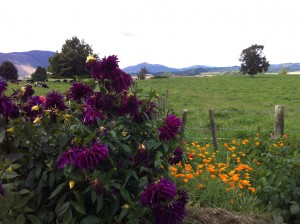 I started the day in cool temps. It was about 20 C, but that’s heaven compared to the past few months. I had a quiet road to run on, passing through forests and farmland.

Another day full of visitors! I did an interview early on with ABC Illawarra, as I headed across the Southern Highlands.

About one kilometre further on, I reached a spot on top of the escarpment, where I saw the Pacific Ocean for the first time on the run since Los Angeles in late February last year. It’s been more than 18 months.